*This edition of NEXT BIG THING contains spoilers for the movie Avengers: Endgame. If you have not seen it yet…why not? Anyway, you have been warned*

NEXT BIG THING looks at the reasons why certain comic book values are on the rise. The views, thoughts, and opinions expressed in this text belong solely to the author and do not necessarily reflect those of Comics Price Guide.

There are a couple Steve Rogers books that jumped in value over the last few weeks and the question, as always, is if this is a short-term, temporary spike or if the new value will remain (or even rise more).

The reason for both of these value spikes is the release of the MCU film Avengers: Endgame. In the movie, members of the Avengers go on a “time heist” to collect the six Infinity Stones from the past and use them to undo Thanos wiping out half of all life in the universe.

During the climactic battle scene, Captain America lifts the mystical Asgardian hammer Mjolnir and uses it to save Thor. That moment calls back to the first book we are looking at today.

In Mighty Thor #390 (April 1988) by Tom DeFalco, Ron Frenz, and Brett Breeding, Steve Rogers is assisting Thor against his old foe Grog the God-Crusher and his minions. This was at a time that Rogers had resigned the post of Captain America and was known simply as The Captain with a different suit and shield. The God of Thunder gets separated from his hammer and is being overwhelmed so Rogers does this: 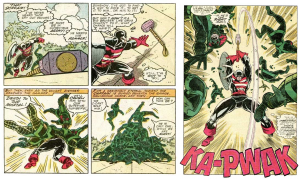 It is the first time Cap was revealed to be worthy enough to lift Mjolnir in the comics and inspired the scene in the movie. It is this moment that has people hiking the price and selling this book online. Because of that, CPG has updated the value of this book to $85 in Near Mint condition. It may be worth scouring your local comic shop’s back issue bin to see if they haven’t noticed yet. However, as cool as this moment was, it doesn’t represent a long term change to either character, so it seems unlikely that this book will retain its new value.

The second book that has recently risen in value is Captain America #25 (December 2014) from Rick Remender, Carlos Pacheco, and Mariano Taibo, with a great negative space mystery cover by Stuart Immonen and Wade Von Grawbadger. In this book, Steve Rogers resigns as Captain America…again. See a theme here? This time it is because the Super Soldier serum has been removed from Rogers and he has reverted to an old man, unable to continue as Cap. So the old man gives the iconic shield to Falcon, Sam Wilson: 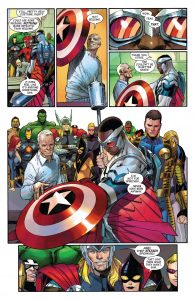 This shield hand-off scene, including the aged Steve Rogers, played out at the conclusion of Avengers: Endgame, hence CPG having the book jump in price from cover price to $25 in Near Mint condition. This one may have the legs to stick and may increase in value if Wilson (played by Anthony Mackie) becomes Captain America in the MCU. A few months ago, the Disney+ streaming service announced a limited series starring Mackie and Sebastian Stan who plays Bucky/Winter Soldier in the films. If that show or a future film features Wilson in the star-spangled costume, this book will likely go up even higher and stay there.