Even if you don’t know Len Wein, you know Len Wein.  It doesn’t even matter how old you are because his prolific career spans multiple companies, genres and decades. 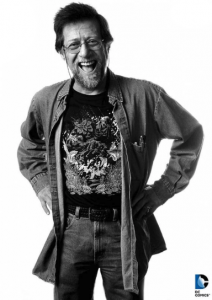 f you read DC or Marvel comics in the ’70s, you’ve read some of Len Wein’s work.  After he and his buddy Marv Wolfman kept visiting DC’s office, they gave him his first shot with Teen Titans #18 in 1968.  In that book, Marv and Len introduce the first Russian superhero into the DC universe. They had another Teen Titan story that would have introduced the first African American superhero into the DC universe but was overturned by Carmine Infantino. (according to Was Superman a Spy? By Brian Cronin)

Len Wein along with the incomparable Bernie Wrightson created Swamp Thing in 1971.  He authored the first appearance in House of Secrets 92 and then the first 13 issues of Swamp Thing.  As you read through those first issues, Wrightson’s art and Len’s majestic words blend into this wonderful recipe of something totally unique.

“The darkness cries, a long, mournful wail that writhes through the gnarled cypress branches like a breath of Hades’ wind, skipping over the placid surface of the stagnant mire below…”

“A muck-encrusted shambling mockery of life…a twisted caricature of humanity that can only be called, Swamp Thing.”

Len’s imprint on Swamp Thing is like the Spanish moss that permanently hangs heavy on a Louisiana Bayou. 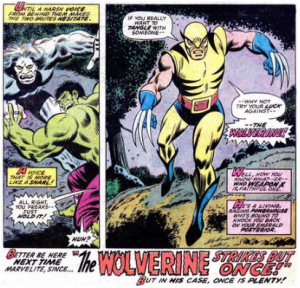 During the early 70’s he worked on anything that could get his typewriter clicking.  In 1974 Len took his talent to the Mighty Marvel Bullpen and changed the landscape. In October he introduced the world to Wolverine, if only with a single page.  The next month Wolverine slashed and quipped his way into our world.

Then in 1975, he invigorated the X-men with one of the most landmark issues ever, Giant-Size X-men #1!

Keep in mind that prior to Len Wein and Dave Cockrum’s time with the X-men things weren’t good for mutant-kind.  The X-men of the late ’60s and early ’70s were a flop. The book was canceled and they issued reprints from issue #67 (12/70) to issue #93 (4/75).  The president of Marvel wanted a group of international heroes and tasked Wein and Cockrum with the new X-men. Together they designed and imagined one of the most world-encompassing groups ever assembled, the Russian Colossus, Japanese Sunfire, German Nightcrawler, Native American Warpath, Canadian Wolverine, and Kenyan Ororo.  In that first issue, there were too many necessary introductions but Len was able to throw in a few jewels.

“She soars aloft like an ebon bird.  Lightning lancing from her fingertips. The glow of life shining full upon her face.”

From 1982 to 1986 he became the editor of DC.  Early on he brought in English writer, Alan Moore, who had been working on 2000 AD for Marvel UK.  He tasked Alan with the writing duties for his creation, Saga of the Swamp Thing. That one decision by Len would have long term ramifications in the comic book industry as Alan Moore pushed all the boundaries.  In conjunction with the Managing Editor and Editor in Chief, Len Wein ushered in important comics for DC.

When he stepped away from editing near the end of 1986 he wrote the dialogue on that year’s big event, Legends (November 1986 to May 1987)

Maybe you are not old enough to remember these moments from the 70s and 80’s that Len Wein influenced, so let’s move toward more modern contributions.  Later in Len’s career, he wrote for television, check out some of these shows that Len wrote.

Len Wein is one of those guys that you don’t realize their impact until you start putting all the pieces together.  Because of that, he is often overlooked. Now, I hope that you think of him as a master storyteller and insightful character creator.

2 Replies to “The Overlooked Talent of Len Wein”