In 1985 when Back to the Future came out, everyone wanted to be Michael J. Fox.  He had an orange vest, an easygoing personality, a beautiful girlfriend (not his Mom), and a wicked sweet ride.  Even now, who doesn’t want a stainless-steel, DeLorean, to drive around town?  Flip those gull-wing doors up and show off your flux capacitor to the world.  In that movie, Marty McFly had to go back to the 1950s to save his world.  Do you realize that comics have done a similar thing by going back in time?

We aren’t heading back into the 1950s but more like the 1990s.  We are at the start of 2019, but it seems comics are in some ways reliving the 1990’s.  Thankfully, they’ve lost most (Most, not all) of the over the top violence, gigantic guns, and massive mammary glands.  Here are some of the ways that we’ve reverted back to the ’90s. (As always, links to books go to Comics Price Guide so that you can see prices, creators, and sales.)

Popular Characters Like the ’90s
When you think about the 1990s and comics there are a few characters or stories that optimize the era.

Thanos
While Thanos was created earlier than the 90’s it was in that time frame where Thanos became the gauntlet slinger. He was appearing in his own books, mini-series about his quests and tormenting Silver Surfer.

Infinity Gauntlet #1 (July 1991) – This six-issue mini-series is a better story than Thanos Quest because of the twists and turns. Thanos Quest was first but was a little basic, Thanos finds someone and then takes their gem.

From The Avengers movie in 2012 until Avengers: Infinity War in 2018 there was a massive build-up to the one and only Thanos.  Here we are stuck between the finger snap of Infinity War and the resolution in Avengers: Endgame. In the comic book world, no one is more focal than Thanos.

In floppy comic books, Donny Cates is writing for Thanos and coming up with all kinds of interesting material, Cosmic Ghost Rider, The Fallen One, Thanos at the end of time.  Could Thanos be bigger?

Venom
Venom got his start in Amazing Spider-man #300 (May 1988) but you already knew that.  After that first Venom story, it took exactly one year for him to appear in Amazing Spider-man again. Then the early ’90s belonged to Eddie Brock and his little alien buddy, basically, Venom was everywhere.  Marvel was creating a new Venom story or mini-series issue each month. These are only the one-shots or mini-series from his origin in 1988 until 1994

Fast forward to 2018 and 2019 and we have a Venomverse, Venomized cover, a king of symbiotes, and a very popular Venom movie.  Seems like Venom is everywhere…again.

I could create similar arguments for Deadpool, Batman, and Harley Quinn. The only person not making a ’90’s resurgence is my main man, Lobo, but there’s still time.

Events like the ’90s
One of the biggest moments of the ’90s was the death and resurrection of Superman.

The same thing happened in movie format with Batman v Superman showing his death in 2016 and his resurrection in 2017’s Justice League.

Image Comics like the ’90s
To clarify, I’m not suggesting that Image Comics is exactly like the 1990s.  What I am suggesting is that the creativity of Image Comics is back.  When they started out in 1992 they were young creatives looking to express themselves and keep the rights to their characters.  They produced a lot of new titles, even if they were too much of everything.

Now, Image Comics is a group of creatives who are producing all kinds of comics for every taste.  The creative factory is back.  Some recent examples from 2018 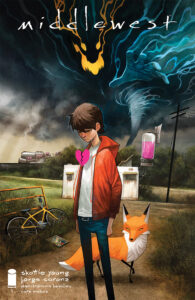 This article could have been much longer and more in-depth but you get the point. Beyond looking back and comparing the two eras, what happens next?  For our Back to the Future analogy are comics going into the future or back to the past?  If you’ve seen the third Back to the Future film with the train, you know that’s a mistake.