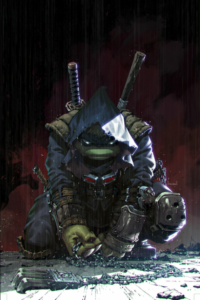 Have you heard of Kael Ngu yet?

I’m relatively sure that you’ve seen his work and not recognized it.  He is fairly new to the field but rapidly gaining a following.  His recent Dark Nights Death Metal #1 featuring a ridiculously gorgeous Wonder Woman has been getting tons of attention.  It’s amazing.  On the other end of the spectrum is an upcoming cover for TMNT: The Last Ronin #1 which has a dark determination.  The interesting lighting coming from the right side, the rain, the clenched fist, the furrowed brow all tell a story.

Since I hadn’t heard much about this rising star I reached out to him for an interview and he graciously accepted.

Ron: “How long have you been working in the comic book industry?”
Kael: “Started 2 years ago with commissions, and then started working on covers since mid-2018”

Ron: “What was your big break into comics?”
Kael: “Hmm, I’m not entirely sure what was my big break, it might be TMNT #97 Big Time Collectibles exclusive, or it might be the Spawn #303 Singapore Comic-Con exclusive. Both were done in 2019 and gave me a lot of followers!”

Ron: “On your website, you mention that you created card game illustrations, anything we would recognize?”
Kael: “That was several years ago when I was still working for the game industry, one specific mobile card game project I got involved in is Mobius Final Fantasy, but that game is being pulled back already I think.”

Ron: “What art style or artists influenced your style most?”
Kael: “JC Leyendecker, Jay Anacleto, David Finch are the three that I look at the most these days. Hah!”

Ron: “Do you have any plans to come to the US for a convention?”
Kael: “I do, initially, we had 4 or 5 conventions planned this year but you know the pandemic strikes. I almost got on a plane for C2E2 before deciding to cancel it at the last minute due to Italy and Korea’s outbreak at that time. Super sad lol.”

Ron: “What upcoming projects or covers do you have coming out?”
Kael: “More X-Men exclusives with Unknown Comics! More Last Ronin, and several others which I don’t think I can announce yet haha!”

Below is a list of all the books we currently have in our system for Kael Ngu in case you’ve become a fan as well.  They are linked to Comics Price Guide so that you can see the covers, pricing, and creative team.