The Rise of Miles Morales

Currently, there is no comic book character hotter than Miles Morales.  (Sorry, Punchline)

To truly understand Miles Morales you need to start in the late ’90s.  During that time Marvel was dying, the Wizard Magazine artificial value bubble had burst.  Marvel filed Chapter 11 bankruptcy and their stories were bankrupt as well.  In that struggling time, Brian Michael Bendis was hired to create Ultimate Spider-man.  Ultimate Spider-man was set in another world (Earth-1610)so the history of Spider-man and the 37 years of continuity didn’t matter.  Bendis could start fresh, he could change and tweak things to tell a good story.  In October 2000 Ultimate Spider-man was released and enjoyed by thousands.  So Marvel continued to reenvision their other properties with varying levels of success.

In August 2011, Marvel decided to kill Earth-1610’s Peter Parker in Ultimate Spider-man #160.  The Ultimate Fallout mini-series tells the story of grief, blame, and a new beginning with Miles Morales in issue #4.  Miles’s next appearance is in Ultimate Comics: Spider-man   Eventually, Miles Morales ends up on Earth-616 as the Ultimate earth is killed off.  Primarily because Miles as Spider-man has become too popular to simply eliminate.

Here are a couple graphs to prove the meteoric rise of Miles Morales.  The first is the number of searches each month on CPG for Ultimate Fallout #4.  This doesn’t include any of the variant covers, just the primary cover.  The green bar shows when Spider-man: Into the Spider-verse was released.  In the last two months, we are at the same number of searches as the month the movie was in full hype.  Ultimate Fallout #4 is the 9th most searched for book for May 2020 behind some wildly popular books.  Personally, I think June could see this book at #1. 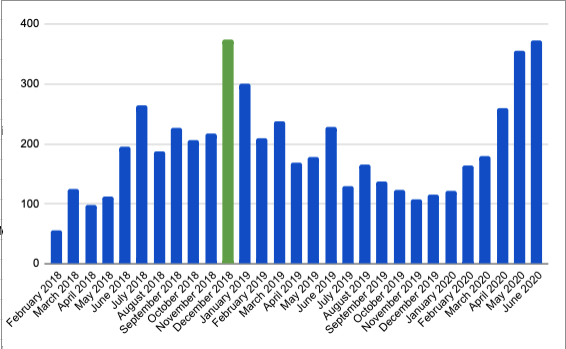 A wise word of caution, this isn’t the time to buy this book.  There are always lulls in popularity as attention focuses elsewhere.  Save your money and wait for a time when everyone isn’t hyping Miles.

Let me know if you like seeing this kind of data,

One thought on “The Rise of Miles Morales”