Over the past couple of weeks, we’ve been talking about DC’s variant theme covers.  However, theme covers aren’t unique to DC, in fact, Marvel did it first.  In a different sort of way but they were the first to think of it.  Back in November 1986, Marvel released 29 covers with the same superhero border on them.  They created this to celebrate their 25th Anniversary, not including Timely.  The Marvel anniversary border was really the 25th anniversary of Fantastic Four #1 in November 1961.

These 25th-anniversary covers are often collected as a set even though they range from kid-centric titles like Care Bears and Muppet Babies to more mature titles like Conan or G.I. Joe.  There were newsstand and direct versions of each book except Marvel Age 44.  The Direct version had either Spider-man’s face, Captain America’s face, Thor’s Hammer, or the Star logo depending on the issue.  Surprisingly, the most expensive issues in the set are the more kid-friendly titles, like Ewoks, Care Bears, and Heathcliff.  In 1986, most collectors weren’t dying to buy Care Bears when Spiderman had a great looking black costume and Batman was being reborn by Miller’s Dark Knight Returns.  Captain America #323 is a notable exception because it features the first appearance of the Super Patriot.

Here is an alphabetical list of titles with links to Comics Price Guide so that you can see the creative team, pricing, and if any members are selling the book.  All are linked to the “A” cover which was the newsstand version in 1986. 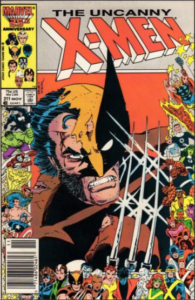 I hope you enjoyed the nostalgia of these covers.