As we dive into the deep end of our love for the 1980s, He-Man and the Masters of the Universe becomes even more popular.  Last week Mattel released pictures of four new 7-inch tall figures that will be released on June 15th.  Netflix is releasing the new animated series called Masters of the Universe: Revelation on July 23.  The voice acting cast reads like a list everyone loves including Mark Hamill, Sarah Michelle Gellar, Kevin Conroy, Phil LaMarr and so many more.  With all this hype around Eternia and the iconic characters let’s look at the comic book appearances.

The first appearance of the Masters of the Universe is found in DC Comic Presents 47 released on 7/82.  That book has seen some meteoric jumps in value.  In 2010, DC Comics Presents 47 was valued at $20, 2 weeks ago it was at $280.  Now it’s valued at $350.  Based on how this market reacts to hot issues I don’t think it’s finished its upward climb yet, since there are big releases approaching.  There could also be a meteoric drop, so proceed with caution, my friends.

The second appearance has a bit more controversy around it since DC released a 16-page preview the month before Masters of the Universe 1 was shipped.  That preview could be found in 11 of the 20 books DC shipped in November 1982.  Here is a list of the issues that included the preview. 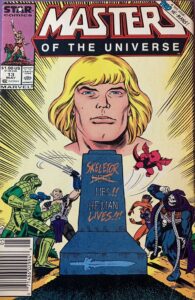 Some of the later Star Comics issues have seen tremendous price increases, especially in graded 9.8.  It’s difficult to discern if this is manipulation by sellers saying they are rare or if they are truly rare in high grade.  Here is some data that might help

The best deals are the 11 preview issues but because there are so many of them, value increases are more difficult.  DC’s Masters of the Universe 1 has virtually the same number of issues owned on Comics Price Guide as the Star Comics 1.  It’s earlier and cheaper so that would be my best suggestion for speculation.

Deals are out there my friends,
Ron

4 Replies to “Masters of the Universe Key Comic Book Issues”