As I discussed in a recent Movie Variant blog post, DC was testing theme-based variant cover from March 2014 through April 2016.  Arguably the most successful thematic variant was the bombshell variants, that were originally released in August 2014.   Ant Lucia was the cover artist on all issues except for the Batman variant, featuring Joker’s daughter.  Was Joker’s daughter that important to the overall series that you needed another artist for it?  Anyway, the bombshell series was so popular that it spawned a line of statues, toys, blankets, Funko Pops, shirts, and other wonderful things.  In October 2015 they release an ongoing series entitled DC Comics Bombshells that lasted for 33 issues.  The series had covers that were more action-oriented instead of posed like the original variants.

Referring to a woman as a bombshell started in the 1930s and was wildly popular during World War II.  For this new rendering of a bombshell, DC revamped each person’s costume with modern elements and a friendly nod to the 1940s.

Below is the complete checklist linked to Comics Price Guide so that you can see the creative team, the cover scans, and if any member is selling the book. 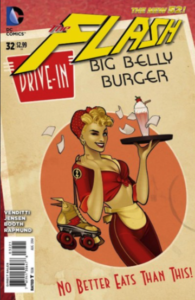 Ant Lucia captures a time period with these covers.  From Wonder Woman’s high waisted shorts to Harley riding a bomb to the drive-in version of Jesse Quick they all speak to an era long ago.  Collectors responded to these issues and they grew into other products but somewhat surprisingly they did not go up in value.  The comic book market is tough to figure out sometimes.

One year later in August 2015, DC released a second version of the Bombshells with male and female characters featured.