In the comic book community, there are certain titles that rank higher than others.  Maybe they rank higher because of popularity or tradition or more key issues or the creative teams.  With Spider-man books, Amazing Spider-man has always been the top web-slinging title.  Amazing Spider-man (vol. 1) was the first, the longest-running and has the most key issues.  That title alone could warrant an article with key issues.  The first 50 issues are packed with important first appearances and they keep coming with Morbius, Punisher, and Black Cat before you hit issue #200.

To me, Amazing Spider-man is the most prolific title in the history of comics.

There are other titles that have individual issues that are more important (Action Comics #1, Detective #27, Marvel Comics #1, Fantastic Four #1, and others) but none have as many key issues or first appearances.  It’s impossible to compete with the first appearances found in those first 50 issues; Vulture, Dr. Octopus, Sandman, Lizard, Electro, Green Goblin, Kraven the Hunter, Scorpion, Mary Jane Watson, Gwen Stacy, Rhino, Shocker, and Kingpin.

#64 – 1st Appearance of Cloak and Dagger with Ed Hannigan Cover 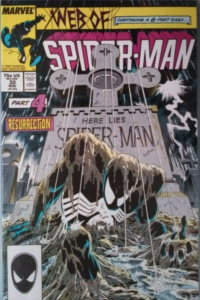 There are 265 issues in Spectacular Spider-man if you count issue -1 and the add-on issue from 2011.  We’ve seen positive price changes with issues #64, Kraven’s Last Hunt, and Maximum Carnage issues.  The trendy Corona issue, #176, has peaked and is currently on the decline.

The third major Spider-man title was Web of Spider-man which began in 1985.  To put this in the correct time frame, Spider-man has just received his black alien costume the year before.  With three distinct titles, some saw this as a repeat of the saturation of Superman titles in the Silver Age.  Would the market accept this title or view it as too much Friendly Neighborhood Spider-man?  Since the original run lasted for 129 issues or 13 years, it’s safe to say comic book fans wanted more Spider-man.

#1 – 1st Appearance of the Vulturions with Charles Vess Cover

There are other books within the 131 issues (2 issues added on in 2012) of Web of Spider-man that people want but these are the top issues.  Issue 118 has seen the biggest price increases lately and is currently the most valuable book in the title.  The Maximum Carnage storyline and the Kraven’s Last Hunt issues have seen positive price increases as well.

Spectacular and Web of Spider-man have some great issues and storylines in them.  The next time you hit your local comic book shop don’t overlook these two amazing titles.  Sorry for the pun, I couldn’t resist.